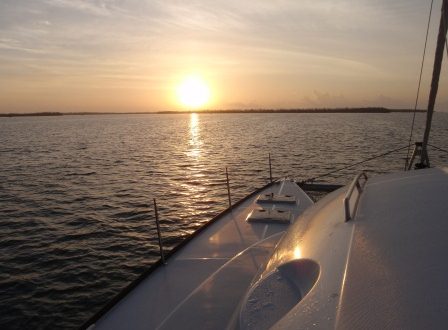 Oscar Ernst is the epitome of a globetrotter – Argentinean by birth, Australian by choice, worked in the USA and Brazil but most importantly, a citizen of the high seas.  After 30,000 nautical miles, Oscar chose to repower his 41-foot Lagoon catamaran with the help of Euromarine with new Volvo Penta D2-40 engines but the before we can tell you why, we must tell you Oscar’s story.

Oscar started his boating lifestyle in motor boats.  He is a keen diver and fisherman and was the proud owner of trawlers and game fishing boats for most of his life.  As he and his wife, Graciela, made plans for cruising further and further afield, he searched from the perfect trawler but couldn’t find it.  A friend suggested a sailing catamaran as it offer him the best of both worlds – the ability to cruise long distances but the safety net of engines.

At first, Oscar was reluctant.  “I had never sailed before,” he explained.  However, his friend and broker convinced him to fly from his then home of New York to San Maarten to view a 41-foot Lagoon Catamaran, Zenitude.  It was perfect and immaculate so Oscar purchased his first sailing vessels decades into his boating life.

It was 2006 and in the next four years, Oscar moved from New York to Australia for work as well as cruised the Intracoastal Waterway down to South Carolina.  Plus, he sailed the Caribbean following the 2007 Australian Cricket team for their World Cup campaign.

“By this time, we were essentially retired and preparing the boat to cross the South Pacific.  We completed some work in Fort Lauderdale and then headed over to Panama to cross the canal.  In the end, my wife and I crossed it three times – two times as crew of other cruising yachts including a sister ship to our own catamaran.  Finally, it was our turn and we were off across the Pacific,” explained Oscar.

It was a relatively short trip which was mostly sailed and without a doubt the stand out was Suvarow Atoll (or Suwarrow) of the Cook Islands which is exactly half way between Bora Bora and Samoa.  “The mystic charge of the atoll is fascinating. We were planning to stay there 3 or 4 days and stay for 3 weeks. A whale gave birth in the lagoon during our stay.  For most of the cruisers I know to leave Suvarow is the saddest thing of the Pacific crossing,” said Oscar.

In October 2010, Oscar, Graciela and Zentiude reached the east coast of Australia which they have since made their base.  And for the last four cyclone seasons, they have made the Gold Coast City Marina and Shipyard their home.  “From my experience, there are three places in the world that are perfect for the boat owner to complete work – Fort Lauderdale, San Maarten and here at Coomera,” offered Oscar.

A repower for the future

Which leads us to repowering Zenitude.  The couple would like to use their yacht more as more of a motor boat.  “We are older and we either get crew or we make it easier for ourselves – we chose the latter to keep our independence.  At night, we will only motor.  In less than ideal weather, we will only motor.  This calls for reliable engines,” stated Oscar.

As the Lagoon had originally been fitted with MD2030C Volvo Penta engines, the practical and pragmatic approach was to replace like for like – except with a little more horsepower.  “The Volvo Penta has always been a reliable engine for us and we didn’t want to find complications by going to another engine brand,” he said.

“Oscar is great as he is so passionate about cruising.  We were happy to help him and glad he has noticed improved horsepower and decreased sound on our seatrials,” said Warren Litto, Operations Manager of Euromarine.

“I was thankful to Warren and the Euromarine team.  They kept to the budget I set, went above and beyond to help with the removal, storage and clean-up of the old the engines for their new owner when I couldn’t be there and of course, the installation of the new engines,” said Oscar.

Zenitude sets off shortly for her next cruise to north Queensland and her owners will be comforted by knowing they have reliable engines and the support of Euromarine.  Follow Zenitude at www.sv-zenitude.blogspot.com.au 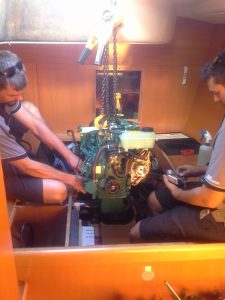 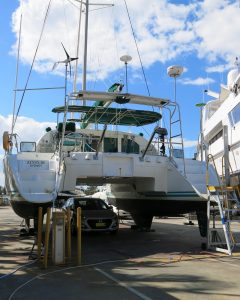